The Onlies are a young group of old friends who perform together in a stringband. They grew up playing fiddles, guitars, and banjos in their hometowns of Seattle, WA and Lexington, VA. With their latest self-titled recording, the band digs deep into performances of traditional american popular (old time) music. The music moves with a pulsating drive, sharp arrangements, and rich vibration — it resounds with the present. 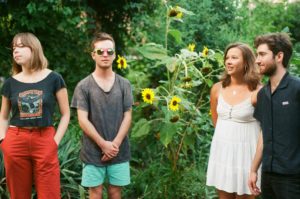 The Onlies is Sami Braman, Riley Calcagno, Vivian Leva, and Leo Shannon. Their new release (THE ONLIES) is their fourth full-length record, though it will be their first one as a quartet since joining with Leva in 2017. The band, all still in their early twenties, won first place at the Clifftop Appalachian Stringband Festival in 2017, has toured the US extensively, and has performed and collaborated with Bruce Molsky, Elvis Costello, Tatiana Hargreaves, Foghorn Stringband, The Bee Eaters, John Herrmann & Meredith McIntosh, and Darol Anger, among others. The record is produced by Caleb Klauder (Foghorn Stringband, Caleb Klauder Country Band), and features Nokosee Fields (Western Centuries, Steam Machine) on bass. It is a committed engagement with the histories and futures of old time fiddle music.