Sami Braman, Leo Shannon, Riley Calcagno, and Vivian Leva will head out on the road as a unit to play some old-time and country music for the people of California, Oregon, and Washington! 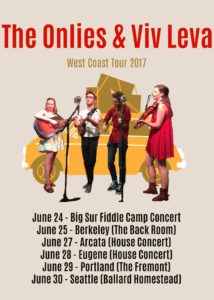 Check out our new video of Jubilee! Enjoy, share, beware the weird faces we make...and please don't sew your lover to your side like we suggest in the song!

Wow. This year has been one heck of an amazing year filled with endless wonders. To attempt to encapsulate this greatness, we thought we’d highlight our favorite musical moment from each month of this year. We hope to include every one of you—the most supportive and enthusiastic group of fans (more like friends) we could ask for. We owe 2013’s success to you!

Note: Links to videos are included, so do click!

January: We had the pleasure of playing the Portland Old-Time gathering for the first time! Here's a video of the Family Dance, Portland Old-Time Gathering. It was a weekend bursting with music, dancing, inspirational people, and Voodoo doughnuts. We got opportunities to jam with friends from near and far, along with deepening our Old-Time musical skills. We’re looking forward to returning again in 2014!

February: Our album was close to finished as we headed over to the East side of Lake Washington to attend Wintergrass' 2013 kid's program. Along with crazy-fun jams, adventures, and parties within ngton to attend Wintergrass 2013. We were Youth Academy Teacher Trainees (YATTs) for the deep corridors of the Bellevue Hyatt hotel, we got the opportunity to play on-stage with Darol Anger and the Furies for a song. T'was a most fabulous fiddle weekend. Later that weekend, we attended a Rushad Eggleston house concert, and got the deep and true honor of accompanying him on "Hegwilard Basugiman"  (Spell check?). If you know Rushad, you know that we were joining him on a Sneth journey toward a Fwethering Ubujnux party (Spell check....again?)-circle extravaganza, as you can see in the video.

March: This month marks the birth of our first full-length CD, Setting Out to Sea! On March 16 at Hale's Palladium, the three of us rosined up our bows and tuned our strings in preparation for our CD release party. We must  say, it was quite an exhilarating night. With the combination of 300+ enthused audience members (made up of friends, family, musical mentors, and personal mentors), The Barn Owls (the opening band), and our boundless excitement, the night couldn't have gone any better. The energy in that room could have fueled infinite rockets to the moon. We also received notice that we were accepted into More Music at the Moore, a program in Seattle for young artists to collaborate to put together a musical show at the Moore Theater!

April: Along with rehearsing new material for the Moore, our families decided to take a trip to Hawaii over Spring Break. It was relaxing, inspirational, and snow-cone filled. While

inspired by the island, we arranged Past the Fog, the song we would later sing at the More Music at the Moore show. Mahalo, Kauai!

May: Always a crazy-busy month, we started it off with performing a collaboration with beatboxer CDQ on New Day Northwest! Under the mentorship of bass player/singer-songwriter Meshell Ndegeocello, we spent a week preparing for the big More at the Moore show after school at the Moore theater. Meshell was a great musical and personal role model for us, exemplifying her love of music and performance through her teaching style. Almost everything that came out of her mouth could be put into an inspirational quote book, we thought. We loved this experience--though different from what we usually do, because it gave us a chance to meet other young musicians in Seattle and learn to cross genre barriers. Who says a fiddle can't back up a beat boxer!

We also had the honor of performing and having an interview on KUOW!

Later on, we had an annual Folklife gig, and were asked to play the National Anthem at the Experience Music Project's Sky Church to honor Jimi Hendrix's musical influence. We put our own twist on it, just like Jimi did.

You can find more videos of the group collaboration at the STG Youtube channel: http://www.youtube.com/user/seattletheatregroup?feature=watch

June: With the conclusion of school comes the favorite time of the year....SUMMER! Leo and Riley drove over to Weiser, Idaho for the Weiser fiddle contest/festival (Sami, alas, couldn't attend). With a week of jamming and fun, Leo and Riley decided to compete in the twin fiddle category of the competition. They made it through to the finals, yet had to leave too early to compete once more. Here's the video. 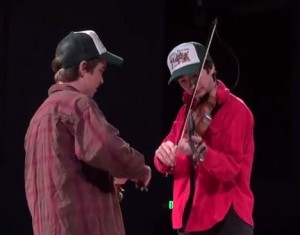 July: We boarded the ferry boat on our way to one of our most beloved fiddle camps, Festival of American Fiddle Tunes! While there, we spent our time roasting marshmallows, exploring abandoned barracks at Fort Warden, playing tunes in those barracks (great acoustics!), playing tunes about everywhere else, putting on crazy hats for the annual campsite hat-party, and not getting much sleep. We all got the opportunity to play a couple tunes on Ed Haley's fiddle, a really memorable musical experience.

August: Man, this month was jam-packed as well! It started with Leo's Clifftop adventure in West Virginia, winning 4th place overall and 1st place in the youth division for fiddling! We are renaming ourselves "Leo and the Onlies" as a response to his success...haha, just kidding! At the end of the month, we embarked on our West Coast Tour! T-shirts were made:

Headed down to Valley of the Moon Scottish Fiddle School (VOM), lead by the fearless Alasdair Fraser, we stopped to play house concerts and shows in Portland, Arcata, Berkeley, Palo Alto, and Cottage Grove. Along with MANY hours in the car, we saw many friends on our way up and down and played a lot of music on our way up and down. Valley of the Moon, like all many fiddle camps, was quite amazing. We played all sorts of tunes with all sorts of people, reconnecting with old friends and meeting new. Riley was constantly pullin' out his ole' banjo, and began to jam in the three-finger style with it! Sami was learnin' new chords on her ole' guitar, and also began to jam with it. Leo was also pullin' out his ole' banjo, and clawhammered it up. I don't know why we just went abbreviation-crazy there, but it seemed to fit the rustic mood!

September: We readjusted to school life, you know, the kind where it isn't quite the "norm" to pull out your fiddle at any time and start jamming on some tunes in the middle of the hallway like it is at fiddle camps. Schoolwork piled up, teachers were good and teachers were bad, life was busy. We did, however, play one show at the Oxbow Pumpkin Farm outside on a day where it was POURING rain...we ended up selling one CD to the two people who showed up! Here's our set-list after the day was done....

October: We played the Issaquah Salmon Days Festival, which was quite a blast. It was a warm and sunny day in October...something unheard of in Seattle!

We also played a show at the Royal Room in Columbia City, a very fun night where we saw many friends! We opened for Scrape, a small orchestra Riley is part of.

Finally, we played a show with A Thousand Years At Sea, made up of Colin and Ethan, two friends from VOM!

November: We Onlies were getting into the Mexican mood rehearsing with Paul Anastasio, Elena Delisle, Juan Barco, and RuthMable Boytz for our Calentano music show! Paul and Elena had asked us if we wanted to play some Mexican tunes (from the region of Tierra Caliente) for a couple of shows, and we had our first one at the Bounty coffeehouse! La musica de tierra caliente es muy bonita, nosotros pensamos! (Now this post is tri-lingual! Notice the Hawaiian we used earlier:) Here is a video of us playing Piedritas Al Agua.

December: Ah, we've reached the end of this fabulous year! We were notified that we made it on to Sound Off, a competition between local bands hosted by the Experience Music Project in Seattle. We're looking forward to it! We're also looking forward to having our own concert series, "the Onlies Presents." A bluegrass supergroup is coming to town on January 8th to play a show--we'll be opening for them. We played a private event on the Paramount Theater stage with a couple friends from More at the Moore, and enjoyed looking out at the massive theater from a new point of view. Our recent meeting solidified our goals for 2014, and there is some pretty exciting stuff to look forward to! Finally, we've been working tirelessly on New Year's Eve to complete writing this, complete embedding videos and pictures, complete adding a few stupid jokes to keep y'all interested. If you still are, congratulations! YOU win nothing except for extra knowledge 🙂

This coming weekend (August 24th-26th), The Onlies will be taking a small road trip over to Leavenworth, WA to play at the Wild and Scenic Music Fest! We will be playing a barn dance on Friday night, and a show at "Canyon Wren" from 2:30-3:15 PM. We are all looking forward to it, and if you have a free weekend, and perhaps want to jam and listen to some AWESOME music from bands and people like Caleb Clauder, Danny Barnes, Hot Cider, The Onlies, and many more, you should come on down! See you there! Here is a video with more info: Wild and Scenic Festival 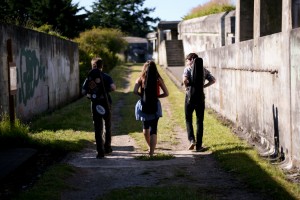 Make your way down to the Lakewood Community Center (4916 S. Angeline St., Seattle) on yes, Saint Patties Day (Thursday, March 17th). While we’re performing at 7:00 PM, you can come get lucky with tables of Ireland’s finest food, including corned beef, cabbage, potatoes, and dessert. Tix are $15 per person for food, or $10 for food and non-alcoholic drinks (kids under 6 are free). For more info, visit the Community Center’s Web site. We will be playing our traditional Irish repertoire, so if your a sucker for some good Irish tunes, we'll see you there!

-The Onlies   P.S. Don't forget to wear green or else you'll be pinched! 🙂

By the way, we will be playing with an awesome bass player named RuthMabel at the dance in Olympia. Hope to see you there!

We are playing a dance at the Loft in Olympia on Feb. 6. It's a benefit for the Olympia Old-Time Music Festival, and we share the stage with the Grizzle Grazzle Tune Snugglers. Here are the details.

We changed our name, after much deliberation, and many an evening's brainstorm. We are now 'the Onlies,' so don't freak out when you see that Beach 3 has disappeared.